It took me a year from the time I first wrote this restaurant in my notebook to when I actually tried it, but at least I got there.

I first noticed Aires de Colombia while driving around aimlessly looking for Empanadas during my Empanada trek last year. I took note of it, but just didn’t have a chance to try it.

I finally went for lunch today. I was alone so my samplings were small, but I was very pleased with my meal.

I started off with my must-have Colombian drink, guanabana con leche. Man, I love that drink. I was a bit cash poor today, so I ordered only a few empanadas, then an appetizer of chorizo that came with an arepa con queso. 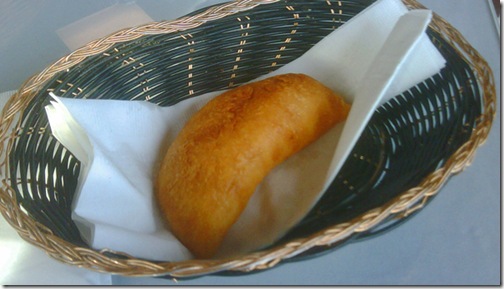 I actually ordered two empanadas. One came out immediately and had obviously been fried before I got there. It was still very good – a fat four-inch half moon with a crunchy orange crust, filled full of beef and some potato. And unlike so many Colombian empanadas, Aires’ empanada filling had a very high meat-to-potato ratio. When the second empanada came out – freshly fried, it was that much better. A great texture to the crackling crisp orange corn-based dough. At $1 each, you could easily leave there dropping only $2 for empanadas and feel satisfied.

The chorizo and arepa came next ($3). Nice sausage. Lots of flavor, a bit of a spicy kick even, in what seemed to be a natural casing. All in all, quite pleasant, if not extraordinary. Similarly, the arepa was quite good. As is typical with Colombian arepas, it came flat , sprinkled with queso fresco. The arepa had a nice slight char on the outside from the griddle, but, importantly, inside it was pillowy soft with a a strong corn/hominy flavor and aroma once you bite into it. Coupled with the quite piquant vinegary salsa they offer, it was a good meal. Including the guanabana con leche, which was $3, my meal set me back $10.

It’s a nice addition to the long list of Colombian restaurants in Westchester.

One Comment on “Aires de Colombia in White Plains”