It took me a year from the time I first wrote this restaurant in my notebook to when I actually tried it, but at least I got there.

I first noticed Aires de Colombia while driving around aimlessly looking for Empanadas during my Empanada trek last year. I took note of it, but just didn’t have a chance to try it.

I finally went for lunch today. I was alone so my samplings were small, but I was very pleased with my meal.

I started off with my must-have Colombian drink, guanabana con leche. Man, I love that drink. I was a bit cash poor today, so I ordered only a few empanadas, then an appetizer of chorizo that came with an arepa con queso.

I actually ordered two empanadas. One came out immediately and had obviously been fried before I got there. It was still very good – a fat four-inch half moon with a crunchy orange crust, filled full of beef and some potato. And unlike so many Colombian empanadas, Aires’ empanada filling had a very high meat-to-potato ratio. When the second empanada came out – freshly fried, it was that much better. A great texture to the crackling crisp orange corn-based dough. At $1 each, you could easily leave there dropping only $2 for empanadas and feel satisfied. 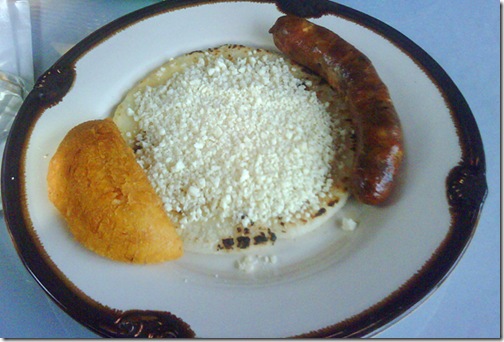 The chorizo and arepa came next ($3). Nice sausage. Lots of flavor, a bit of a spicy kick even, in what seemed to be a natural casing. All in all, quite pleasant, if not extraordinary. Similarly, the arepa was quite good. As is typical with Colombian arepas, it came flat , sprinkled with queso fresco. The arepa had a nice slight char on the outside from the griddle, but, importantly, inside it was pillowy soft with a a strong corn/hominy flavor and aroma once you bite into it. Coupled with the quite piquant vinegary salsa they offer, it was a good meal. Including the guanabana con leche, which was $3, my meal set me back $10.

It’s a nice addition to the long list of Colombian restaurants in Westchester.

This is generally a very positive, hopefully uplifting blog. However, it’s with regret that I share this tragic news about the passing away of Marcelo Azar, the owner and proprieter of Med Empandas. I quote here from a comment left by his mother-in-law, Jan Fields to my Empanada Guide.

Marcelo and his wife, Stacey Fields, loved to create good food and good conversation together. Over the past 7 years, they worked together in many restaurant ventures, from French Confessions ( Pleasantville), and their own restaurants; Broadway Cafe (Valhalla), and Med Empanadas (Briarcliff).

Marcelo’s memorable, booming voice could be heard through the restaurants, “HELLO MY FRIEND!, I made something special for you!”, and it was always an oversize portion.

The young couple shared a deep love for each other and their 3 month old son, Marcelo, “Marcelito”. In the last 3 years, they never left each others side.

In April ‘09, one month after Marcelito was born, Marcelo was diagnosed with 4th Stage Melanoma. Together, Marcelo and Stacey fought this cancer positively and aggressively. Marcelo’s entire family came from Uruguay to join Stacey’s family in supporting them through the next 2 months.

As the treatment was having encouraging results, the couple’s plan was to re-locate to Uruguay by August for a less stressful life. Marcelo’s health depended on dramatic life changes.

In a sudden, unforeseen turn, Marcelo died on Sunday,07/05/09, due to complications from chemotherapy. He was 36 years old.

The eulogy above accurately reflects my limited experiences with Marcelo. Every time I visited MED during my Westchester Empanada excursions, he was always very outgoing and eager to talk to me about his business. He was outgoing, friendly and clearly took great pride in his product. On top of that, he was very talented at his craft. Those are three qualities one would hope more people would emulate.

Finally, when I visited MED the last time, with Liz Johnson of the Journal News to complete the Journal News write up of my guide, he spent considerable time with us and was genuinely thrilled at the attention his little empanada store had been garnering. I have no idea what the future of MED will be; it may already be closed at this point. I’ll try and find out more details.

My sincere condolences and prayers for his family, and particular his wife and three month old baby.