I’m in the process of writing up notes from my two days of pure pork gluttony in Arkansas last week, but need to shoot off this quick dispatch. As an unashamed Southern California boy still in exile in New York, I’m always pining for a taste of home (honestly, half the reason I fly back to LA is for the fish tacos at Tacos Baja Ensenada). I have a routine when I travel to California. My first stop is always In-N-Out and my last stop before heading back to the airport is In-N-Out.

So, I was really taken aback when walking down 23rd street in Manhattan yesterday going to my office when I saw what, at a glance, looked exactly like an In-N-Out Burger (forgive the terrible quality cell-phone pictures): 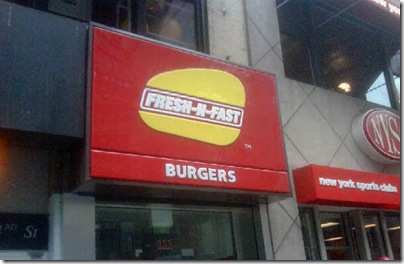 It’s a new burger joint, just steps away from the uptown 6-train subway stop at 23rd Street. Clearly, they have In-N-Out as their model. Everything was a copy – the menu, the font, the color scheme, the red-striped tiling on the wall, the hyphenated “N” name, even the paper hats of the employees are In-N-Out ripoffs. They even tout the fact that everything is fresh and they don’t have a freezer. The only thing missing was a glass case of t-shirts for sale with pictures of California beaches. 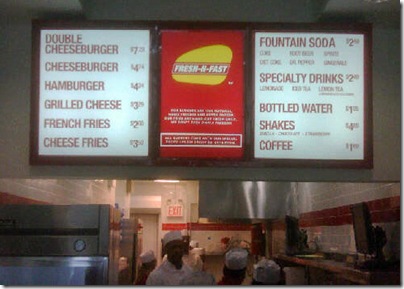 Having a blatant In-N-Out rip off in NYC both intrigued and annoyed me. I’d love an In-N-Out burger locally, but I’m not sure how I feel about the obvious copying of the entire In-N-Out restaurant. I did a quick search and it looks like I’m not the only one who has noticed the striking similarities.

So, like any good expat, I decided to give it a try. The first difference is the price. A single burger will set you back $4.24, cheeseburgers are $4.74, fries are $2.60. But more striking is that a double cheeseburger goes north of $7 and a shake is more than $4. Those are Shake Shack prices.

Having eaten literally thousands of In-N-Out burgers in my lifetime, I think I’m a pretty good benchmark. 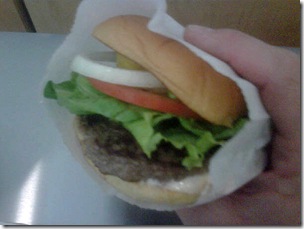 The Fresh-N-Fast burger is actually pretty decent, with a soft pillowy white-bread bun that compacts under the burger, crisp iceberg lettuce, and nice red tomatoes. Fresh-N-Fast burgers also have an In-N-Out-esque thousand island like sauce. But the big difference is the patty. The Fresh-N-Fast patty was bland with little flavor and a slight cardboard-like texture. It may not have been frozen, but it still didn’t have a beefy freshness to it either (where Shake Shack excels). Don’t get me wrong, the burger isn’t terrible. It’s a competent burger, satisfies the urge and can be acquired quickly.

Their fries are slightly thicker than In-N-Outs, but are similarly weak – I’ve never been a fan of In-N-Out’s fries. Fresh-N-Fast’s fries may have been a bit better, but it’s all relative to me.

Frankly, if it didn’t try and rip off In-N-Out so blatantly, I’d probably think much higher of Fresh-N-Fast. But because they explicitly welcome the comparison, I have to declare that they just don’t measure up. And comparing to similarly styled burgers in NYC, I’d still give a big advantage to the Burger Joint at the Parker Meridien followed by the Shake Shack.

All that said, it does have one big leg up on Shake Shack. On a sunny day, you won’t have to wait an hour for your burger. And for those of us who don’t have interns to send down to wait in line for us… that’s a big plus.