In honor of El Charrito taco truck in Stamford, CT 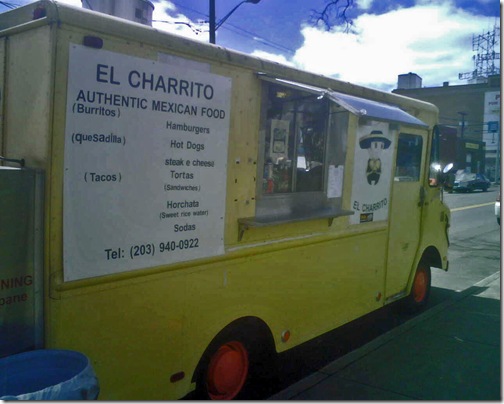 So, I found out last week that El Charrito is going to close up for the winter. I’m not sure what I’ll do for tacos from now until March. After all, they’ve been the only taco I’ve had in Stamford since I discovered them a year and a half ago. But, while I wait until they reappear in March, I figured I’d recap everything I’ve eaten there:

Huaraches – Although my first ever experience at El Charrito consisted of

tacos (when they were still hanging out in the the Shop Rite parking lot), it wasn’t  until I had the huaraches in their current location that I was really sold on this place. Their huaraches are thick, sandal-shaped, semi-hard and chewy tortillas smeared with refried beans, meat of your choice, lettuce, cotija cheese, crema, avocado and salsa. These huaraches are very, very good. They aren’t stuffed huaraches like you find in some places where the “tortilla” (for lack of a better term) is filled with beans or meat inside (ala pupusas, but thinner). Nevertheless, these huaraches are very good. At about 9 inches long, these make a pretty good meal unto themselves. $4.50 each

Sopes – really, at El Charrito, sopes are about the same as huaraches, just smaller and round with a slightly thicker tortilla. Excellent.

Tostadas – a different vehicle, but the same formula as sopes and huaraches, with beans meat of choice, lettuce, crema, salsa and cotija cheese. And, like the others, they are very, very good.

Tacos – The tacos are very good at El Charrito. I haven’t tried every variety, but I’ve come really close. So far, I’ve sampled carne adobada (marinated pork), al pastor (another marinated pork, though not spit-roasted like traditional Mexican al pastor), bistek (beef), cecina (salty beef), pollo (chicken), lengua (beef tongue), carnitas (slow-roasted pork), pescado (fish) and pescado al pastor (fish cooked “al pastor style” with pineapple). All of them are good. The standouts for me though are the carnitas and the two fish tacos. The carnitas are good, rich and moist. Sometimes the chunks of fat – intentional with carnitas – are a bit too big, so I’ve got to pick them out, but otherwise, no complaints. And the fish tacos… well, they are excellent. Tender chunks of marinated white-fleshed fish, cooked to perfection. These aren’t baja style fish tacos, which are battered, deep fried fish filets, topped with cabbage and a spicy crema. But they are excellent nonetheless. $2.50 each

Tortas – tortas are the ultimate lunch fare. Big Mexican sandwiches, on a big roll, griddled, slathered with refried beans and filled with queso fresco-style sliced cheese, lettuce, avocado, jalapeños, cotija cheese, salsa, and a huge pile of whatever meat you choose. My favorite torta is always the carnitas torta. El Charrito’s is huge and messy. Get extra napkins and watch out for spilling on your suit. I’ve had more than one trip to the dry cleaners as a result of their tortas. $5.50 each (I think)

Quesadilla – these are a real treat. Put out of your mind the flour tortillas that you find at most places or make at home.  At El Charrito, quesadillas are made from huge hand made corn tortillas, probably 12 inches wide, delicately cooked on the griddle, then folded over and filled with the meat of your choice, some Oaxacan cheese (I think, as it resembles mozzarella in taste and texture ), and other goodies. I think they serve gringo style quesadillas too, so make sure you order quesadilla ala Mexicana. $4.50 each

Hamburguesa – As much as I might say the tortas are messy, the hamburguesas make the tortas seem downright tidy. These are hamburgers with a true Mexican spin – spicy mayo, sliced jalapeños, avocado, etc. These would be the best hamburgers in town, except the quality meat they use isn’t the best. I’m not positive, but it seems they just use normal pre-made beef patties similar to what you find from Costco. If they upgraded to some great ground beef, these would be amazing. They still really hit the spot, but until they upgrade the beef, they aren’t the best thing on their menu by any stretch. $5 (I think)

Tamales – Tamales are only sold at El Charrito on Saturdays, but they are worth the week-long wait. The only tamal they offer is the Oaxaqueño variety – either chicken or pork tamales wrapped in banana leaves rather than corn husks. If you’ve never had a Oaxaqueño style tamal, it’s worth the effort to hunt them down. The banana leaf imparts a unique earthy flavor, and the masa is much smoother and much softer than the more toothsome corn-husk tamal. While I wish these were the real traditional Oaxaqueños, replete with mole negro, they are still wonderful in their salsa verde or salsa rojo form.

Sincronizadas – The best way to describe these are a cross between a quesadilla and a ham and cheese sandwich. In Mexico, the ones I had were made with small flour tortillas, with thin slices of ham, queso amarillo (yellow American cheese), pickled jalapenos and avocado. They may not sound very good, but they are surprisingly addictive. At El Charrito, sincronizadas are made with flour tortillas, with a stringier cheese (probably Oaxacan), refried black beans, and thin slices of ham. That’s pretty much it. I can’t say it’s my favorite thing at El Charrito, but it can be satisfying in a guilty pleasure, comfort food kind of way. $4.50

Burritos – These are the only glaring omission in my list, as I’ve yet to try them at El Charrito. I fear this has more to do with psychology than anything else. Over the years I’ve developed such an aversion to burritos that I just can’t bring myself to try them any longer. Maybe if I were hanging out in Texas or Northern Mexico, where burritos are legitimate components of the traditional regional cuisine, but anywhere else, I just see burritos as an appeasement for the gringo. I realize how silly and elitist that sounds. But I can’t help it. So, I can’t report on their burritos.

Whew… that made me tired. And hungry again.

UPDATE: I went by for some dinner tonight and found out that they’ve changed their plans and no longer are taking the entire winter off. Instead, they’ll be around until January, then will be leaving for Mexico for about three weeks. Then they’ll be back in business. So, Stamford folks, no need to lament a loss of tacos for the entire winter.

El Charrito: Taco truck in Stamford. We have arrived! 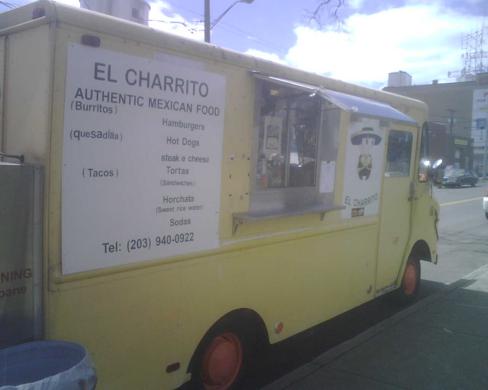 I take back all my badmouthing of Stamford’s Mexican places. I take back my cursing of Mexican food in general in Connecticut. And, temporarily, I take back all the bad things I’ve muttered about living in this cold Mexican wasteland these past 7 years.

At least for now

Because today as I was doing errands, I found El Charrito, a taco truck parked in West Stamford.

I actually first ate at this truck about a year ago. I saw it parked in the Shop Rite parking lot and had a good taco. Then I never saw it again.

Today, I drove by and slammed on my breaks when I saw it parked there. It’s hard to miss – a big yellow truck with a big old sign on the side that says, “El Charrito.”

The husband and wife that own the truck are extremely friendly. The wife, a Stateside born Puerto Rican, who speaks perfect english takes the orders and will help you navigate what’s good that particular day. The husband, from Mexico, does all the cooking. And he’s good.

Today I had a huarache with carnitas. Man, it was awesome. Not just passable, but truly good. Think of a huarache as a thick tortilla, pan fried, about a foot long and 5 inches wide, topped with black refried beans, meat of your choice, shredded lettuce, crema and salsa. Man it was good. the carnitas was good and tender (not as rich as the best carnitas, but better than any other that I’ve had in Stamford). The huarache is all hand made from fresh masa, as are the sopes. For only $4.50, the huarache makes a great lunch. As far as I know, it’s the only place in Stamford that sells huaraches.

Huaraches and sopes were the special today.

Their regular items include tacos, tortas hot dogs, hamburgers, quesadillas, etc. Plus, they have horchata too. Tacos are $2.50… not sure what some of the other items are priced. They also sell something called sincronisadas, which is something like a big old ham, cheese, beans quesadilla.

They said the truck is parked in the same spot each day – across from Sachs Plumbing, on the side of that triangular jackie robinson park. For the address below, I’m going to approximate…

I hope it’s as good next time I go.