Scouting the best empanadas in Westchester County – an interim report 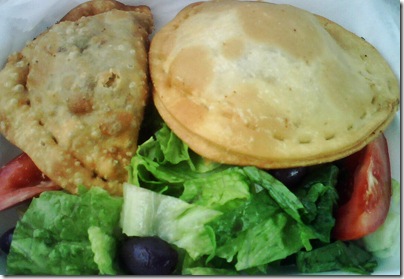 Lately I’ve had a hankering to do some deep food exploration in Westchester. It has now been nearly a year since I wrote up the report for Westchester Magazine’s “Eater” blog about the State of the Taco in White Plains.

Feeling the itch to go much deeper in the exploration, I’ve decided to take it on myself to try every empanada humanly possible in Westchester County to find where – or if – greatness exists in the realm of the wonderful Latin American turnover.

As usual, I started this quest with a query to Chowhound. Based on some previous notes, and some of the suggestions coming from that thread, these are the places currently on my target list.

I know there are more places with empanadas in Westchester County (afterall, pretty much every Latin restaurant of any kind has them), but these are the ones I’m focusing on right now.

I won’t go into specific notes, but here are a few observations.

So, I’ll have much more detail to my notes in a few weeks. In the meantime, I’m sampling the untested places on my list, as well as exploring if I’ve missed some places on the list altogether. Ideas? Let me know…

When I’m done with this trip, I’ll write up all of my notes on my food exploration. But in the meantime, I’ve started a quick thread on Chowhound on some of the food I sampled in the Mission District.

But as a preview, here’s where I’ve been eating thus far:

And I’ve still got a day left. So, until the excursions are over, this will have to wait.

After a failed attempt to scout out a new empanada place in Briarcliff Manor, we set our sights on Pony Express in Pleasantville. The restaurant is a tiny burger joint run by the chef of Iron Horse Grill. Having come as a recommendation from George, by no means a carnivore, I figured it would be a good bet.

Their specialty is the slider – small snack sized burgers. And while those looked tasty (they come two to an order), I set my sights on the larger 6 oz burger. After all, there’s nothing worse than leaving a burger joint hungry. So, I ordered the El Charro burger, a big burger with onions, pickles, tomato and lettuce topped with jalapeño pepper cheese and chipotle sauce. I must confess, was an excellent burger. The beef was appropriately beefy, but not overly salted to compensate for inferior meat. The brioche bun was absolutely perfect and the accompaniments did their job to accent the burger without taking away from the main star.

My only disappointment was that the burger, ordered medium, was cooked to well done without a hint of pink. Now, generally, that’s an unforgivable sin for a good burger joint. Luckily, their good quality beef saved them preserving the burger’s flavor and juiciness. But next time I go, I will expect a medium burger to be just that.

I wouldn’t consider this a destination burger, but if you are nearby, it’s well worth the visit.

In search of banh mi greatness in NYC

Ever since I spent considerable time in the heavily Vietnamese sections of Sydney, Australia, I’ve been infatuated with the natural fusion of French-Vietnamese food. As missionaries, in the morning we’d head out of the flat and the first thing we’d do is find a Vietnamese bakery for the best croissants or ham and cheese croissants in the city. They were amazing.

For some reason, however, I don’t remember eating many banh mi sandwiches, which are, in my estimation, the pinnacle of all east-west fusion foods: a warm, crusty baguette filled with fresh vegetables – usually pickled daikon, julienned carrots, cucumber, onion and cilantro – and a number of possible choices for meat – from vietnamese meatballs or roast pork to pate or fish balls. At worst, the sandwiches are a great break from the standard lunch fare. At best, they are one of the most satisfying foods on earth. All hyperbole intended.

It wasn’t until I moved to New York City that I really got sucked into the world of the banh mi sandwich.

Over the years, I’ve been trying to find the best banh mi in the city. After many a lunch in Chinatown scouting lots of possibilities, here are my top three:

So, those are my top three. What are yours?

I’ve written about this place before – though it’s probably been two years ago – but I thought I’d give an update.

I went again for lunch today. Very good casual Guatemalan food there. First, their empanadas are quite good. They are hand made and fried. Try the chicken. Second, the tacos are excellent – primarily because of the tortillas which are all hand made. These are a little different to mexican tortillas. They are much thicker, but much softer. Hand patted, griddle cooked, and steaming goodness. They had fried pacaya, quite a few other good steam-table offerings as well. I still haven’t tried their tamales, but intend to next time.

Now, I think the key is going there early for lunch. You’ll battle the crowds of workers coming in, but most are there just for take out. It has only three very small tables. But if you go early, the tortillas and all the food is freshly homemade. I’ve been there for dinner and the tortillas weren’t as fresh. Not sure if that’s always the case or not.
The tacos are pretty good. The fillings are tasty enough, I guess (stick with the bistek, which though a little salty, is the tastiest). My chorizo filling wasn’t that great. But it didn’t matter since the tortillas were so dang good.

This is NOT a fancy place. This place gives dive it’s name. But if you are looking for a guatemalan fix, or just some really dang good hand made tortillas, this is your place.

Just a quick note that Los Gemelos in Port Chester is now making and selling blue corn tortillas. A pound costs $1.50. I didn’t get a chance to try them, but I haven’t seen freshly made blue corn tortillas around these parts, so it was a nice find. I prefer their regular tortillas to anything you can get in a mass supermarket, so I’m hopeful these will be the same.

Interestingly, I didn’t notice them on their menu in any form, though I may have missed it.

While on the topic of Los Gemelos… it had been a good 6 months since I’d been there. I think that’s the longest I’d been away from there since I first went 6 or 7 years ago. Anyhow, their prices have gone up. Tacos now range from $2.75 to $3.50. Burritos are $7.50 and Tortas are also $7.50. Now, to be fair, the torta I had today was absolutely HUGE (as are their burritos, I think). And, I must confess, their carnitas torta was as good as ever. But it is getting pricier. They continue to make the place look a little spiffier inside, with a new bamboo ceiling, covering the last exposed surface of the factory insides that used to adorn the whole place.

Now if they could just make their booths a little more comfortable to sit in… Oh well, the food is still great.

A year or two ago, I finally made it to La Herradura and had one of the better tacos I’ve ever had in the Tristate area. Hand made tortilla, flavorful grilled skirt steak (really), guacamole, etc. It was awesome. I’ve recommended the place pretty highly based on that one taco and the fact that the interior isn’t dingy – which is generally the case with the places I like.

But Laylag’s post here had me concerned: http://www.chowhound.com/topics/48539&#8230;
So, I decided to go back there yesterday and check it out. Boy was I disappointed. It didn’t even seem like the same food.

Like laylag experienced, the only salsa was the table salsa, which is a tomato sauce concoction. Bad and boring.

I ordered two tacos – grilled steak (same one that enthralled me last time) and a shrimp taco. My wife order flautas, and the kids had a variety of dishes.

First, no more hand made tortillas. Same tortillas that you get anywhere.

Second, they put lettuce on their taco. What??? Granted, these were their “Herradura” style tacos, which I’ve now realized must mean “Gringo” taco to them. You get guac, lettuce and pay $2 more per taco.. But last time I went and ordered it, it certainly didn’t have lettuce. That’s an unforgiveable abomination in my book.

Wife’s flautas were quite poor and everything else we ordered was your standard typical east coast bad mexican. Really disappointing.

What’s happened? Was my first visit a crazy anomaly? But if they were hand making their tortillas when I went the first time, that’s not something they do just on some odd night… that’s very a deliberate attempt to go above and beyond. It takes skill and dedication to hand make tortillas for a restaurant operation.

So I’m guessing they’ve changed their cooking staff or something? The menus look exactly the same though.

Anyhow, sadly, I can’t recommend it any longer. But, at least there are still 4 other above average Mexican places within walking distance.